Ludlow is a dot on the map along Interstate 40 between Needles and Barstow. It's hot, dusty and on a bad day can be really windy - and did I mention it can get hot ?

9 April14
Today we went further west, leaving Kingman to take on the Mojave desert in all its heated fury. The first stop was at Topock to revisit that new lookout I discovered on the way over. The morning light was good and trains were a plenty. 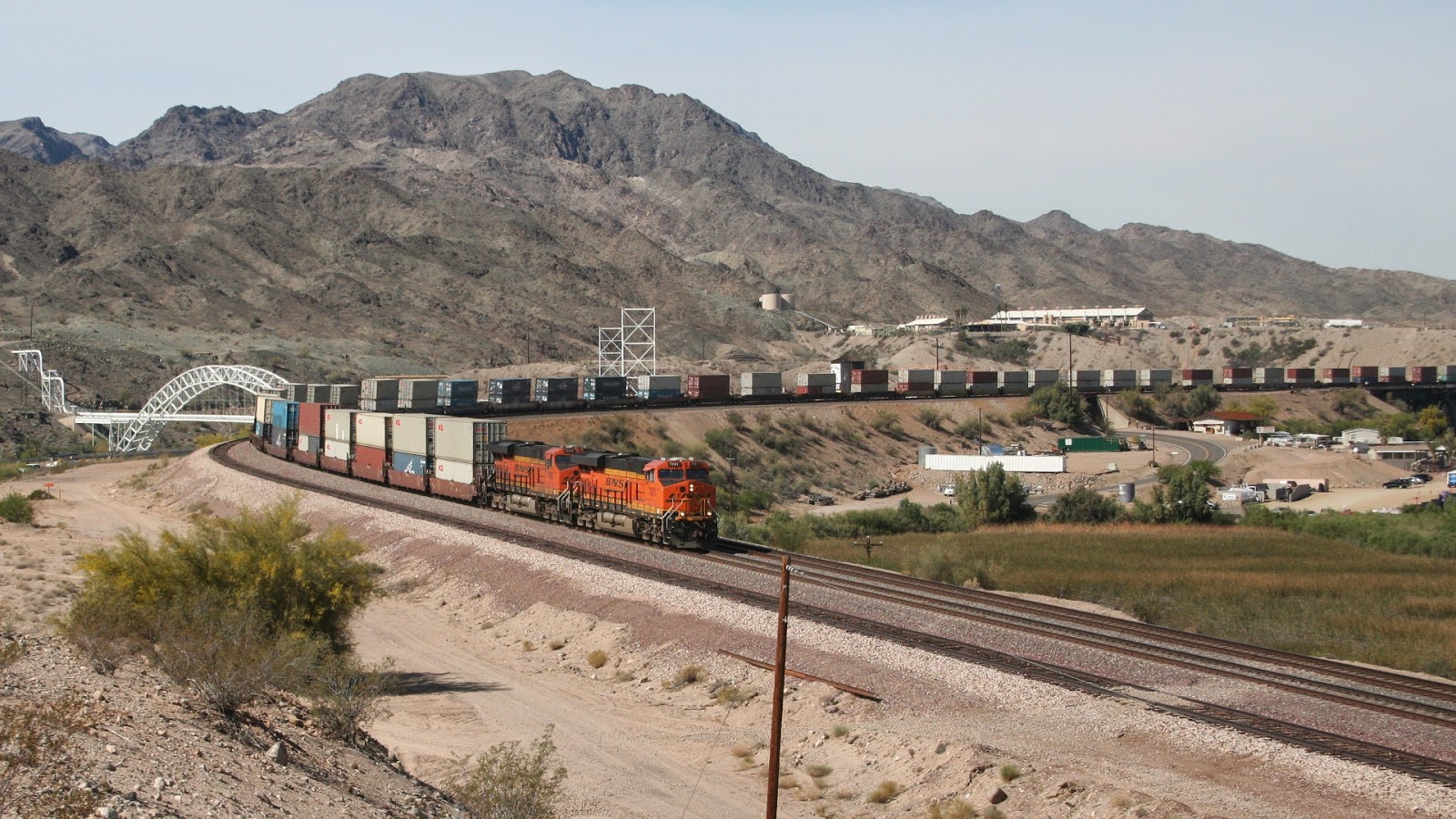 The second stop was at Arrowhead Junction, northwest of Needles. By now things had slowed down and trains were running on the wrong track to cater for a welder carrying out some repairs.
A quick stop at Fenner to freshen up and then it was down to Essex on Rte 66. The temperature and been climbing steadily and it was really starting to warm up.
The next stop was at Amboy for a drinks break, and this is where the outside temp peaked at 98 degrees
Farenheit - awefully warm methinks.
A quick stop at the Amboy crater had us interacting with some wildlife, much to its disgust: 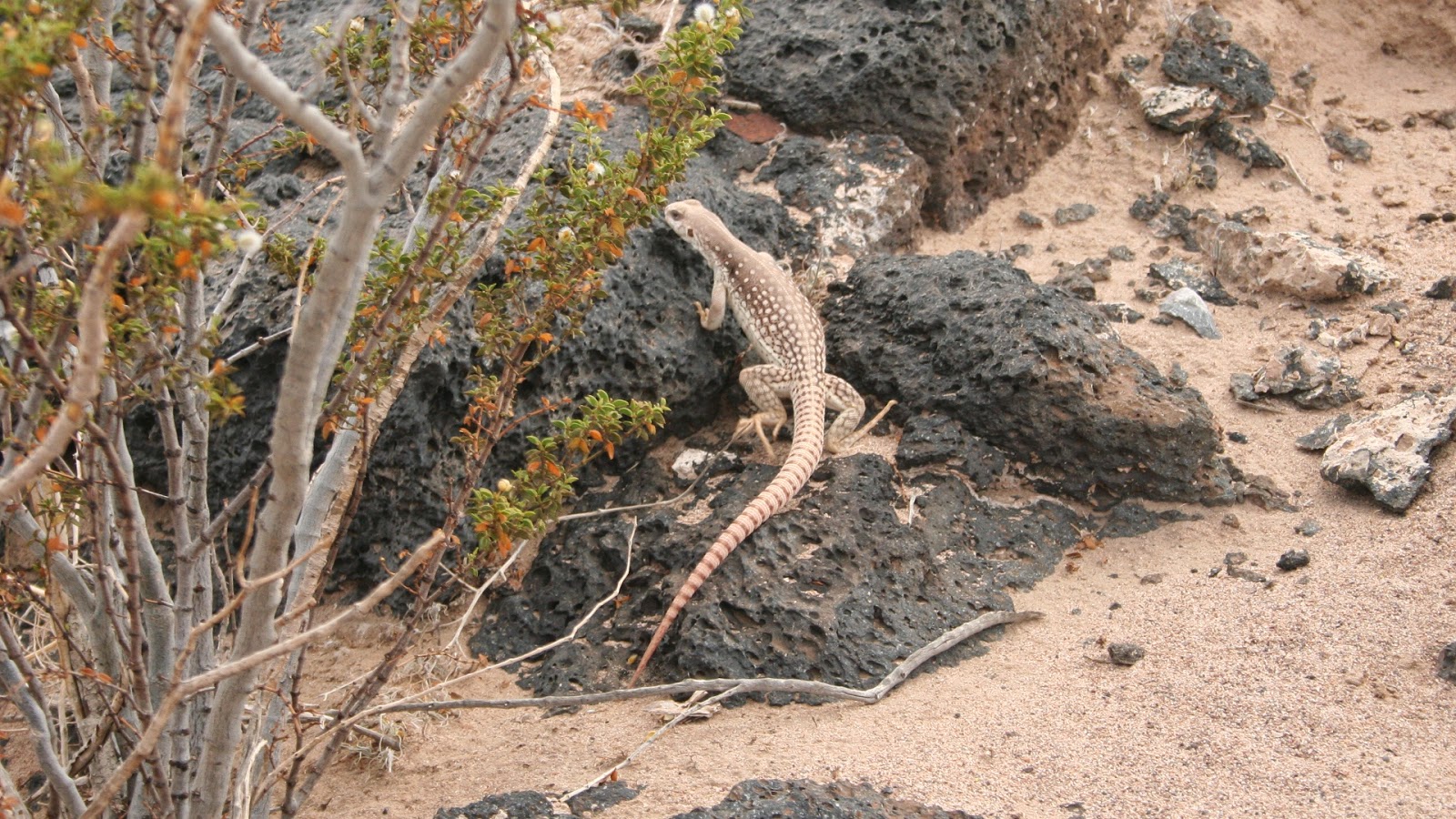 The journey to Ludlow had us stopping in various places as eastbound trains just kept coming and coming - until one of them suddenly glided to a stop right beside us. All I could think was "What on earth have we done"? We managed to backtrack to the locos and just after we got there, the entire train glided downhill with only the lead loco providing minimal of power. At Ludlow we bumped into a loco repair crew from Barstow who told us that the MU cable was pinched, which cut out all the locos and they had to go reset and test all the computers for the crew. Interesting times.
Those two BNSF guys have never met anyone quite like Jim, who can talk at 100 mph and change the subject just as fast - those poor guys never knew what hit them !

An evening at the Ludlow yard - if you can call it that - had Jamie bumping into a group of railfans from Cajon who kept him entertained for about an hour. It turned out that it was none other than Marc Fournier - co-producer of 7 Idea productions. We has a wealth of knowledge on local operations and invited us to catch up with him when we were in his area - Cajon Pass. To be continued. An evening at Ludlow lasts about 20 minutes - twighlight about 5 minutes - the sun drops like a rock i nthe desert - one minute it's light, the next it's dark.
A couple of trains trundled through, but nothing to write home about. A BNSF maintenance truck rolled passed us and slowed down so he wouldn't kick up any dust - very thoughtful of him.The Cadiz turn (a train that goes from Barstow to Cadiz and back to interchange with the Arizona & California) went through late and as I write this at 9:20 pm, has still yet to return.

The entire group has been sitting outside in the dark and the heat spinning a few yarns, drinking free drinks
from the gas station and bonding well, looking at all the unfamiliar stars in the night sky. Good to see.

Ludlow is a dry town - which doesn't bother me or Jamie in the slightest. The aircon in my room was on the
fritz, which was totally unacceptable - especially in this heat, so I bought the tool I needed from the gas
station and fixed the darn thing myself. Happy as. We commence our exploring tomorrow.

10APR14
Today we headed to Kelso for the simple pleasure of filming the Union Pacific on the Cima hill and having lunch at the Kelso Depot. On the way we saw a dead snake on the road that the ravens were making a meal of.
Things have changed a bit: the Kelso depot is closed on Wednesdays and Thursdays, and when it is open, you can no longer have a meal there. This initially changed my best laid plans, however as we were sitting in the shade deciding what to do, a train turns up - never saw them all move so fast.
.
Further up the hill there was a meet with a downhill train, and by the time we caught up with the original one,
it was just about to round the top of the hill. On the way back to Kelso "hawkeye" Jamie spotted another one on the way up. That was number three.
With no-where to eat and relax, and the fuel gauge indicating the wrong side of half full, it was time to head back to BNSF country.

Today we found out from some very frindly BNSF staff that everything was stuffed up - something we alluded to this morning. Lots of track maintenance was backing things up - trains parked up "on every siding to LA". Although this suits the photographers, it's not much fun looking at stationary trains. One loco engineer was kind enough to give us 2 bottles of water - straight out of their fridge - it had ice in it. Much appreciated as the max temp we endured today was 102 F (38 degrees C) - rather warm.
The constant parade of stack trains is a tad annoying, but it's just the way it is.

11APR14
Today we were supposed to chase the Cadiz Turn from Ludlow to Cadiz - oops - no-one knew that it didn't run on Fridays (or Saturdays for that matter). That didn't turn out to be a bad thing as we got lots of shots locally - and as I write they keep thundering through Ludlow. Hot again, but not as bad - 92 degrees.

12APR14
Today is another exploration day around Ludlow and we didn't really end up going all that far. Although Siberia sounds like it should be in another continent, it's a landmark about 10 miles from Ludlow where the double tracks split into two single tracks. Myself, Jim and Chris spent a bit of time exploring this area - read as: hurry up and wait - as well as Ash Hill. The desert winds are starting to build, however the temp has dropped to around the mid to high 80's. 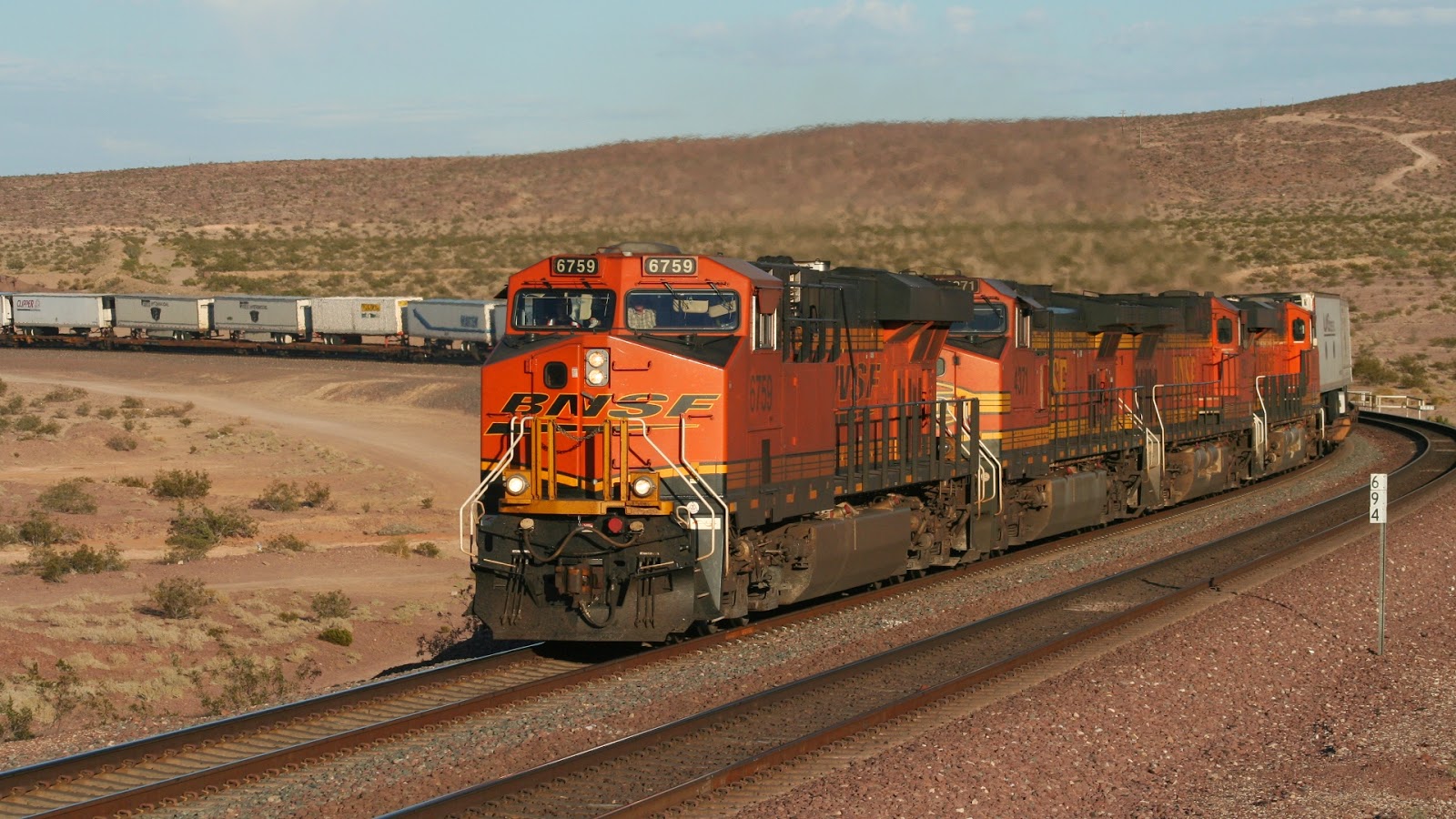